You are here: Home / Chariot 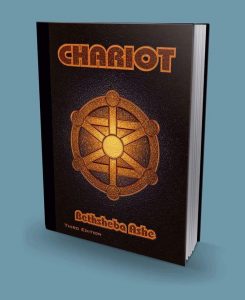 The Chariot of YHVH has wheeled through history – from ancient Egypt and the birth of the alphabet to modern day Judaism and Kabbalah, the Tarot card system, and as a recapitulation of later day Merkabah texts for the hermetic adepts of an Inner order.

The alphabet did not just emerge out of a process of evolution – it was also designed according to a mathematical plan. Each letter in the older Hebrew alphabet – the one in which the bible was originally written in – also had a number. These letters/numbers were attributed to the spokes and circumference of a Wheel; a Chariot Wheel that was ridden by the great Rider of the Clouds: YHVH.

The cosmology of the Wheel was represented in the creation myths of Eden and in an architectonic fashion by the Temple of Solomon. The Torah was written with the gematria belonging to the Wheel. It was the Wheel within a Wheel that was spoken of in prophetic terms by Ezekiel, and it was the Seven Palaces of the Canaanites and then the Merkabah Mystics.

It was the lost calculator spoken of in Jubilee’s and it was the Pardes of Rabbi Akiva. The Merkabah was deemed a forbidden area of study unless you happened to find it yourself. It was reformulated into the Kabbalistic Tree of Life in the middle ages, but the way to restore it into the Chariot Wheel was left in a riddle in the Zohar’s ‘Book of Concealed Mystery’. It was uncovered by more than one Western magical fraternity and it’s symbolism was used in the Tarot Cards and in the papers written for the Order of the Silver Star.

Illuminated within are such matters as: the typological date of creation according to Genesis; the name of Abraham magnified; the numerical secrets of the D’bir; the number of Mitzvot in the Torah; the calculations on Pi; the calendar and the planetary orbits; the early pantheon and the Goddess; the numerical symbolism within the Garden of Eden; the Merkabah and the Zohar; the symbolism of the Tarot to Merkabah; and the recapitulations of Merkabah in the 20th Century.