You are here: Home / Gematria / What the apple really was… (spoiler alert – it wasn’t sex). 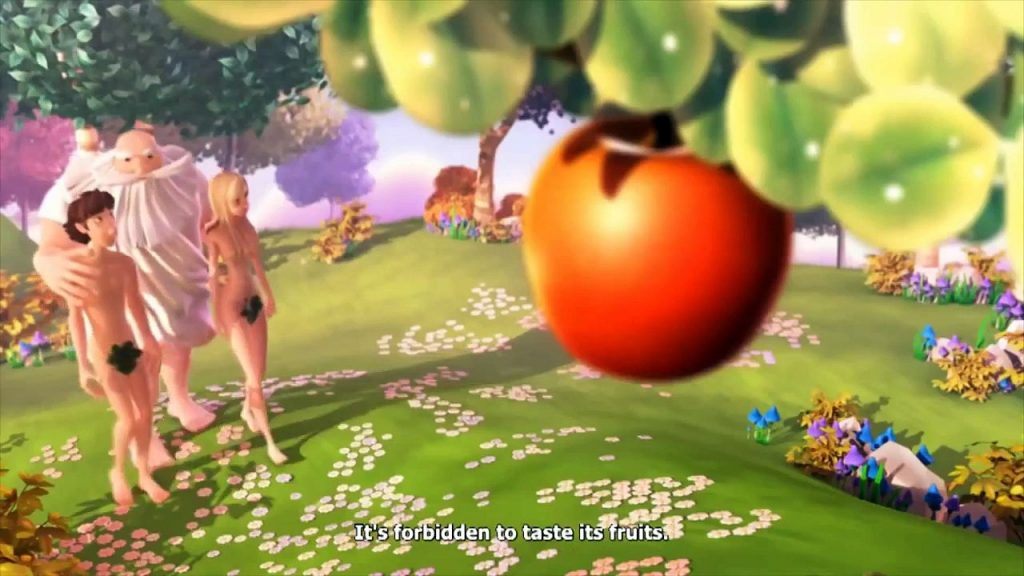 Introduction.
The bible is stuffed with apparently unexplained metaphors, which is one of the reasons why people have speculated over it for thousands of years; in the seeming absence of any type of clarification people have delighted in putting forward their own.  In the case of the fruit of the Tree of Knowledge, people have suggested that its a metaphor for the first nookie, or that the fruit gave intelligence to humans that separated them from animals, but these are just guesses.

Yet it is possible to discover what the fruit really was with gematria.  Gematria is the art of assigning numerical values to letters so that words can be calculated as part of a mathematical sum.  But to discover the secret level of meaning (the ‘sod’[1]) of the bible, you have to use the right gematria.  This has (until relatively recently) always been a carefully guarded secret however, so the chances are that you’ve never heard of it before.

The gematria of the Torah was an intrinsic part of the Merkabah[2], but it became a forbidden topic of conversation for Jewish people after the second century C.E. Judah the Patriarch (who edited the Mishnah) banned all discussion of the Merkabah[3] and so the gematria values published in the Talmud and the Mishnah are wrong for the Torah; infact they are a deliberate blind intended to throw eager seekers of the Torah’s hidden level of meaning off the scent.

Academics today generally hold any sort of gematria in disrepute, having lazily assessed the wrong numerical values and inevitably found them wanting, but to date there has been no study of the gematria of the Merkabah, and therefore scholars have nothing to say on the matter.  Nevertheless there have been better scholars that believe there is gematria in the bible[4], and they trace the origins of the practice to Mesopotamia where it was first used with the cuneiform script.  The gematria of the Merkabah was first discovered in the last century by the self styled occult magician ‘Aleister Crowley’ and by myself in 2014 after a careful study of the Zohar’s ‘Book of Concealed Mystery’ which contains a riddle – the solving of which reveals the Seven Palaces[5].  This diagram is an alpha-numeric logo-graphic arrangement.  It contains the letters of the Hebrew alphabet assigned to Palaces (similar to sephiroth) and Paths, and it allows us to decipher the hidden gematria of the Merkabah [6]:

Main.
To discover the identity of the fruit of the Tree of Knowledge we need to consult בְּרֵאשִׁ֖ית (Genesis) 3:3.   You can check the following calculations by following the link, and even if you don’t know how to read or speak hebrew you can still study the gematria of the Torah using the modern interlinear feature.  Not to sound too much like the mouse in Disney’s Ratatouille – but everyone can count.  You need to memorize the 22 letters and numbers above, and that’s it!  You’re ready to roll.  Not too difficult, is it?

“And the fruit of the tree which in the middle of the garden”. – Genesis 3:3
ומפרי העץ אשר בתוך ־ הגן

In my experience of the calculating art, typically the use of the words such as בְּתוֹךְ ‘middle’ or ‘’between’[7] denotes the function of division by 2 of the following noun, which in this case is הגן ‘garden’ 58. Therefore: 58 / 2 = 29 and when we add this to ומפרי ‘and the fruit’ 336 results in 365 (days in a year).

In the rest of the verse Eve says to the serpent “God has said, ‘You shall not eat from it or touch it, or you will die.’”  This is couched in mathematical metaphor with ‘eating’ being ‘to subtract’ from the number while just ‘touching’ is ‘to add’ to the number.  But in any case the prohibition is against altering the 365 day year in any form because the light of days was divinely decreed to fall to earth.  The garden of Eden was situated above the earth in a realm that was before (and after) manifestation on the cosmos of the Seven Palaces.  Therefore when Adam and Eve ate the fruit of the Tree of Knowledge they had to descend with the light of days to earth, and all beings that descended to earth were subject to the cycle of death and reincarnation.

Conclusion.
Unlike other numerical systems, the gematria of the Merkabah actually works to decipher the hidden meanings of the Tanakh (Old Testament).  Therefore it is something of a Black Swan in today’s world because it is surprising and completely unlooked for, yet capable of causing a deep and systematic change in the way that people of all Abrahamic religions understand the bible.

In the case of the gospels, it can be unambiguously shown that the Book of John used the gematria of the Merkabah transposed over to the Greek script, so it is not something that is confined to Jewish books but affects Christians and Muslims too.  The NT shows that Jesus was 12 hours worth of daylight!

Until relatively recently it could not have been appreciated just how many verses of the Tanakh and the NT were not intended to be read, but counted instead.  Frequently the results thrown up by the Merkabah argue against reading the open text of the bible in a literal fashion; either as a historical document or a collection of stories about the ancestors of the Jewish people, because the characters in these stories (including Abraham, Sarah, Jacob, Joseph and Jesus) appear as personifications of natural forces or periods of time.

It may seem ironic, but the most widely read book in the world of all time, is the most misunderstood and misinterpreted.  The scribal authors were discussing ethics, sociology, duty, good and evil, and asking questions such as ‘what happens after we die’? Does God actually give a shit? How should we live and what is brotherhood and sisterhood all about? What does ‘family’ really mean? And at the same time they were intellectually curious men who were fascinated with the revolutions of the stars and the orbits of the planets at a time when no-one could prove what they were but everyone had a theory…

I think that still deeply resonates with most people, because if we’re all completely honest – there’s a lot of stuff like that; no-one can prove what happens after you die or if there’s a quantum God or if we get reincarnated. So I actually find the Bible more interesting and instructive than before when I did read the thing more literally and didn’t have the keys to read it properly.

What people read into the bible tells us something about ourselves, but after 2,000 years of such self-absorption, isn’t it time that we as a species finally discovered what the ancients were actually saying?

—————————-
There is a limit to how much I can write in a blog, but if you have found this essay interesting you may enjoy my book ‘Chariot’ which is available on Amazon.  https://www.amazon.com/Chariot-Bethsheba-Ashe/dp/1530524431/

[4]   Lieberman concludes that, given the employment of numerological techniques before and during the composition of the Hebrew Bible, it is entirely possible that Gematria was employed in the biblical text itself, encoding hidden messages.  A Mesopotamian Background for the So-Called Aggadic ‘Measures’ of Biblical Hermeneutics?, by Stephen J. Lieberman, Hebrew Union College AnnualVol. 58 (1987), pp. 157-225:
https://www.jstor.org/stable/23508256

[5]   The Seven Palaces are at the core of Merkabah literature.  Kabbalah came about largely in response to the prohibition upon free study of the Merkabah, and the Seven Palaces was derived into the Tree of Life so that students could discuss the Merkabah in an enciphered fashion.
http://bethshebaashe.com/conformations-tree-life

[6]   A mathematical analysis of the Seven Palaces shows an interplay of numbers upon each of the faces, with each depending on the others for support and existence, and conveys a sublime insight into the interdependent functioning of the cosmos as well as providing a checksum for the gematria.  See the link above for an illustration of the Seven Palaces.

The reason why there are two incidences of the value 3 (gimel and shin) and 4 (daleth and tav) is because the number system is logo-graphically keyed to the closed cosmological system of the Seven Palaces and was not constructed as an open number system.  With all the letters in the correct placement then the order of the alphabet sums to 217:

Please scroll to the bottom of the page to see a chart illustrating how the gematria of the Merkabah’s Paleohebrew script was wrongly converted into the ‘Standard gematria’ of the Ashuri (square) script, and thus hidden from general discovery:
http://bethshebaashe.com/sarah-and-abraham

[7]  If something or some person is “between” בֵּ֣ין some other thing or person then the scribe is trying to tell you to halve the value of whatever is between.

[8]  In some texts of the bible, it is common for Hebrew scribes to employ this type of conversion.  Modern people still use base 60 for time measurement, thus 3:02 minutes (base 60) is 182 seconds (decimal).  It was originally invented by the Babylonians:
https://en.wikipedia.org/wiki/Babylonian_numerals

[9]  The seasonal character of Esau and Jacob as the personifications of Winter and Summer start at Genesis 25:27:

The origin of the story is Mesopotamian – typological to the Myth of Emesh and Enten (The Debate between Winter and Summer) which was recorded during the mid to late 3rd millennium BC.