You are here: Home / Gematria / The Gematria of Man 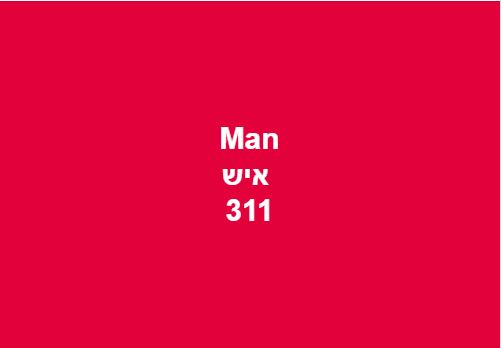 One of the consequences of studying the gematria of the bible is that I look at this and instantly count the proper value of 14 for the hebrew word for ‘man’.  AISh ~ Aleph = 1, Yod = 10 and Shin = 3.

One of the other consequences of studying the gematria of the bible is that the number of a word is of very little consequence to me, unless it is used in a deliberate biblical calculation somewhere in the Torah, or in subsequent Jewish writings.

On its own, the word (any word) stands in a void of isolation; bearing no relationship to other actors. It is simply a word and a number. Most of the time there is no intrinsic relationship between words that share a common number. When chance coincidences occur, the whimsy of these things can delight me when I see the role that chance and randomness play in our imaginations. But I don’t take it as a serious method of biblical analysis.  It’s not “the Sod”.  For instance this;

יאש  Meaning: to desist, i. e. (figuratively) to despond. Usage: (cause to) despair, one that is desperate, be no hope.

…this word ‘IASh’ also has a gematria value of 14, but are we to take the rather gloomy prophecy from this that man is a hopeless case because the number of the word man shares its digits with that of IASh? Come on… it really is utter nonsense, isn’t it?  At best it’s a form of imaginative numerical doodling that can randomly stimulate creative ideas.  You can do the same thing watching clouds though.

So if you want to study the hebrew language, why not take a look at their words in context?  The first incidence of AiSh in the Torah, that is without other prefix and suffix letters, occurs in Genesis 2:24:

It says “There-after will leave a man (+) his father and (+) his mother and join in his wife, and become to flesh one.”

Go and study the interlinear text for a while and come back to this.

If we consider the logic of the relationships of the actors to one another; clearly the sum of the man must be subtracted from the sum of his mother and his father, but his sum is joined to that of his wife.

My working hypothesis is that the text is disclosing the calculation of an intercalary 13th month.  To keep a 12-month lunar year in pace with the solar year, an intercalary 13th month would have to be added on seven occasions during the nineteen-year period (235 = 19 × 12 + 7).  When Meton introduced the cycle around 432 BC, it was already known by Babylonian astronomers.

If Adam and Eve were personifications of the Sun and Moon, it would go a long way to explain the genealogy of Jacob and Esau (who personify the Summer and the Winter) later on in the Book of Genesis.  Were it not for tradition that insists upon treating these biblical characters first and foremost as human beings, the idea that seasons are descended from an impressive lineage like the Sun and the Moon, is far easier to swallow than the idea that the seasons came from human beings.

In case you haven’t heard yet; you can now use the Shematria biblical calculator to help you explore the bible with gematria!  Shematria is coded using the original paleo-hebrew sourced gematria that the bible was originally written in.  So make sure that you bookmark that for future reference.

Please consider donating to the app, so that I can continue to update it with features like a Greek database, or opening up a users only area.  Thank you.