You are here: Home / Gematria / Merkabah ~ the secret center of Kabbalah!

Welcome to my blog about biblical gematria, the merkabah and the birth of the alphabet.  In my next posts we’ll discover why the Merkabah is the beating heart of Kabbalah and its secret center.

Before we start today, I’d like to address an issue that came up after my last blog post (besides the layout issues with the calculations).  I accidentally mislead by saying the Greek values had been transliterated.  In actual fact I’d reasoned that if biblical Isopsephy followed the pattern of biblical gematria then two of the letters of the standard Greek set would be incorrectly numbered as 300 and 400.  I determined that these were the Tau and Upsilon and I adjusted the values of those accordingly.  Likewise I adjusted the Greek letters that matched the sofit values of the Hebrew to their normally valued counterparts. So I started with the standard values for the Greek and adjusted them to biblical gematria with these tweaks.  My apologies; I’d temporarily forgotten how I came by them.  I should really take more notes…  Many thanks to David Allen Hulse for pointing out my error.

The three most famous texts of Kabbalah are the Sefer Yetzirah, the Bahir and the Zohar and all of them are connected with either biblical gematria or with the conformations of the Seven Palaces [the Wheel of the Chariot].  The Yetzirah may have used biblical gematria with an ancient system of trigonometry, while the Bahir and the Zohar each contain midrash upon the Palaces.  One book of the Zohar in particular (the Sefer Dtzeniouthia) contains a riddling instruction for converting the diagram of the Tree of Life into the Seven Palaces.

The Sefer Yetzirah
The most famous and arguably the most controversial of the texts of Kabbalah is the Sefer Yetzirah.  There is debate over whether the text can even be classified as Kabbalistic due to the early date of its composition[1] and its gnostic influences.  I’ve studied it, but to tell you the truth I’ve never gotten very much sense out of it, which is a reflection on me and not the text.  Happily, my friend ‎ראובן הלוי has been doing rather better, and after analyzing the Sefer Yetzirah with biblical gematria (aka Chariot gematria) he believes that an ancient system of trigonometry may be embedded within the text.  He’s used biblical gematria with the 231 Gates of the Sefer Yetzirah.  I will quote him here in full: 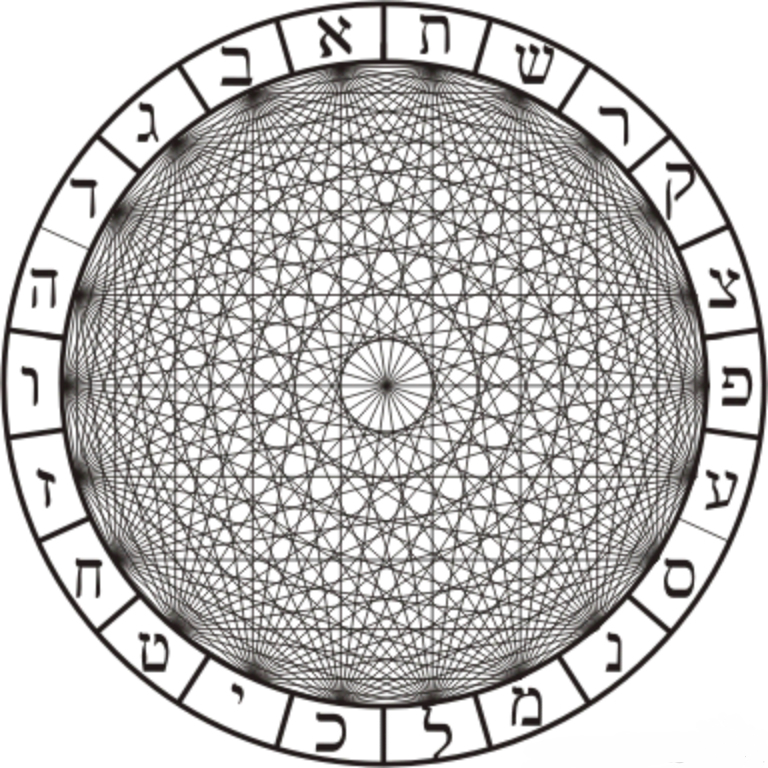 The 231 gates of the Sepher Yetzirah.

“I created a modified circle of letters by combining ג/ד into one section and ש/ת into one section since ש/ג and ד/ת share the values of 3 and 4 respectively. So instead of a circle divided into 22 sections, it’s now divided into 20 sections with the line between א and ב centered at the top, and the ג/ד and ש/ת sections directly opposing each other from either side of א and ב. 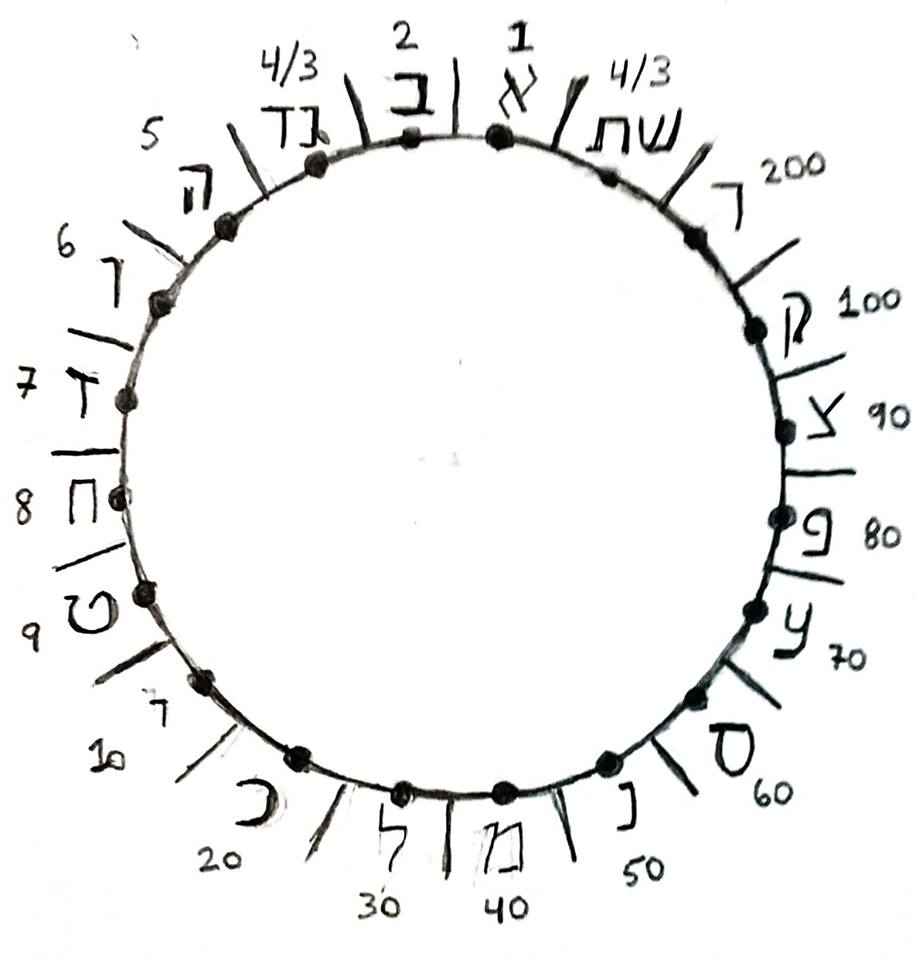 Note that if ש is 300 and ת is 400, gates with equal values will only form parallel lines that never intersect. For example פי ,עכ ,סל and נמ all have the value of 90, but all of those lines are parallel, because in a circle, 80~10 contains 70~20, 60~30 and 50~40― so they will not intersect. If we take two random gates that do intersect, like במ and טק, the intersection will be somewhere in the middle of the circle, not at the circumference. Only the Chariot gematria allows triangles to be formed whose vertices are on the circumference of the circle. 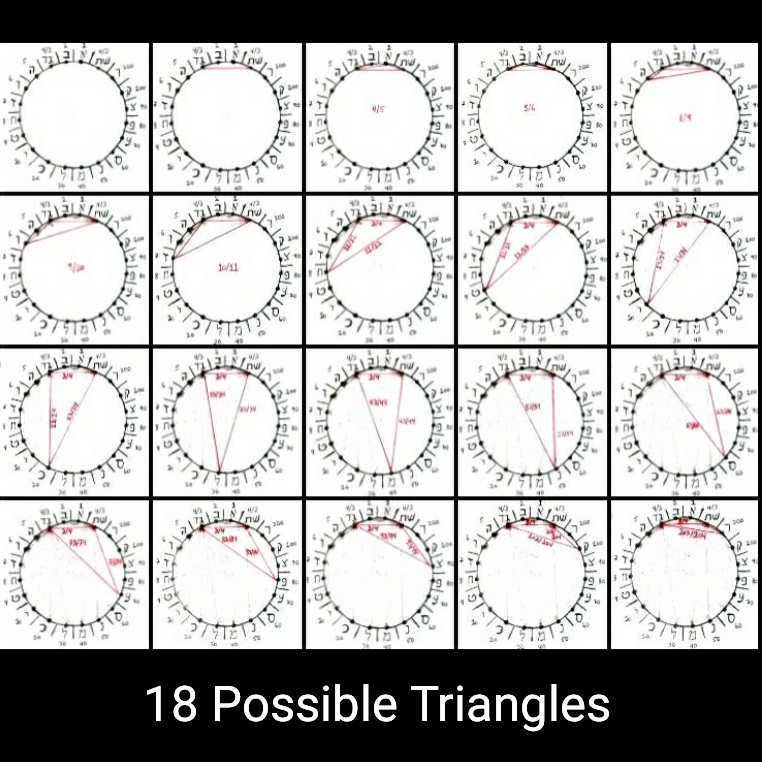 What I have to do now (and I would much appreciate the help of someone more adept at mathematics than myself) is figure out if these values correspond to a table of sines/cosines. If so, then the Sefer Yezirah― when decoded with the Chariot gematria― contains an ancient system of trigonometry.” ~ ראובן הלוי

Unfortunately I can be of very little use to him as my mathematical skill is rather basic, so if you can help him take his research forward please get in touch!

Next up we’ll be taking a look at the the Sefer Bahir so stay tuned for more numerical honey.

[1]  Christopher P. Benton dated it to the time of the Mishna (2nd Century CE) due to its grammatical form, but Richard Reitzenstein placed its origin in the 2nd Century BCE.