You are here: Home / Gematria / More about the Genesis alphabetic acrostic

Welcome to the fourth installment of my blog about gematria, the Merkabah and the birth of the alephbet, and a happy Hanukkah to you all.

Yesterday I gave you the Genesis alphabetic acrostic to contemplate, but today I’m going to attempt a brief potted commentary on it, although its really something I feel should be expounded upon by a more learned soul than myself.  I’m not going to throw open all the gematria of the first two chapters of Genesis for you, because that would deprive you from the fun of finding out new things about the Torah for yourself, but I will point out the most interesting or pertinent information as I can.

What the presence of the acrostic means is that we have far more information about the qualities of the letters and their attributions to the Seven Palaces.  It functions as verification of the great antiquity of Genesis, given that the Shin and Tav are placed in their earliest order and not at the back of the alephbet.  The acrostic also means that we have a lot more information about these two chapters of Genesis herself.  For example, when on the path of Cheth, said Elohim :

Let Us make man in Our image, according to Our likeness; and let them rule over ‎the fish of the sea and over the birds of the sky and over the cattle and over all the earth, and over ‎every creeping thing that creeps on the earth.

The verses of Genesis, and indeed all the Torah were first publicly numbered (as we find them today) by Robert Estienne (Robert Stephanus) in 1571, but the ‎move was not without criticism at the time from traditionalists.  The manuscripts that he worked from did not ‎contain the chapter and verse divisions in a numbered form.

The progression through the alephbet in Genesis starts with a Beth (2) for the Seventh Palace (at the top) rather than an Aleph, though Aleph (1) is the smaller number.  There are also two Alephs for the two Palaces directly to the left and right of the Beth, as if Beth had been split into two, like a new shoot, to form the Palaces of the Alephs; of Day and of Night.  Beth is also the letter that begins the Book of Genesis with the word בראשית, which has the value of 220 [and 220/7 gives a pi approximation]. 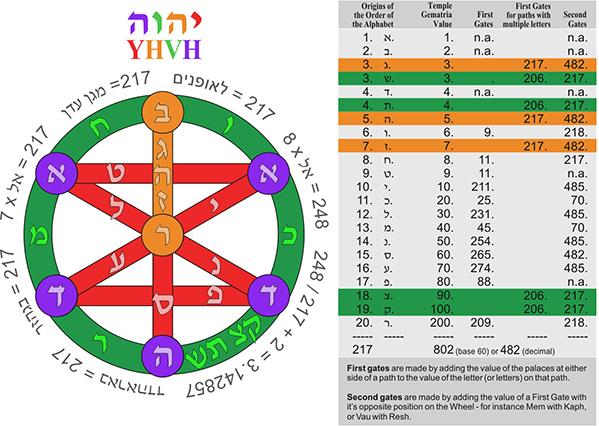 The Seven Palaces with Gate correspondences.

Kabbalah supports the idea that the Beth begins the acrostic with the Aleph coming afterwards.  Note the the Aleph is called twice:

The Creator told her, “Aleph, Aleph, although the world was created with the letter Bet, you will be the head of all the letters, for there is no unification in Me, except in you. In you will all calculations begin, all the works of the people of the world, and the whole unification is only in the letter Aleph.” ~ Sepher Ha Zohar.

The letter Beth means “house” or palace and it was where Elohim was thought to dwell in the thick darkness of the watery expanse that the ancients believed surrounded the earth.  It is from this Seventh Palace that he began his work to create the Heavens (or the Sky) and the Earth with his sacred signs.

If you’re exploring the gematria of Genesis it’s worth noting that gematria calculations are generally intended to come to fruition over several subsequent verses, so if you can’t determine what text is telling you in that verse, see if the values are carried over to the next verse.  For instance:

The Talmud tells us that there are 613 commandments in the Torah; 248 Positive Commandments (do’s) and 365 Negative Commandments (do not’s), however there is disagreement on whether 613 is the right number since the matter rests on gematria that would, if calculated with biblical gematria rather than Standard, result in the value 217, but on the other hand it may simply be that the use of Standard Gematria rather than Biblical Gematria is the norm in the Talmud.  I cannot explain what 613 has to do with the Palaces of the Aleph or the Day and Night, so answers on a postcard please…

If I were to mnemonic the letters via the descriptions from Genesis they’d probably resemble something like this:

The letter Daleth needs a little further explanation; as it is assigned to two Palaces, but only one of them – the one to the left – is being discussed in her verses.  This Palace represents the door through which all things enter into the world from heaven.  It’s twin on the right side is the door through which all things exit the world and enter heaven.  In these verses, though they seem to be about the creation of trees and vegetation in the world, the take away is that it is the first time God has caused anything to live upon the earth and so it is the first time one of these doors are used.

A note to say about Teth.  Because these verses begin with the word “behold” הִנֵּה֩, which is a word that indicates there is gematria to follow, we must total the gifts that Elohim has given to man.

One more matter of note is the origin of the letter Tsade.  This has long been an open question to attract a great deal of debate so I feel quite free to offer the unusual but logical suggestion here that the letter Tsade may have started off life as an image of an ancient vaginal specula.

I hope you’ve enjoyed this installment as you navigate your way through the gematria of the Torah.  Tomorrow I’ll be discussing the relationship of the tabernacle and first temple to the Seven Palaces, and on Thursday this will be followed by a discussion about the implications for the long planned for Third Temple.  So stay tuned for more numerical liquid gold.