The biblical text that is most associated with the Divine Chariot is Ezekiel; who gives an account of a vision where there were wheels inside of other wheels, and a living creature of four faces; that of an ox and a lion and an eagle and a man.  The vision is actually a calculation to indicate that the living creature had the numerical likeness of Abraham (248).

Before we get to that, we’re going to be looking closely at ‎the Hebrew letters and the part they play in Jewish mythology about the creation of the world and in ‎what is called the secrets of the Torah.‎

‎The Mishnah tells us that these secrets are “the esoteric Act of Creation and the Act of the ‎Divine ‎Chariot,” and it adds “which should remain hidden”.‎

A thousand years after the Mishnah, Kabbalah was invented. Although you’ve probably read, and it is ‎popularly cited that Kabbalah is Jewish mysticism, it’s actually a rather elaborate cipher for a type of ‎secret biblical exegesis known as ‘the Sod’. We won’t be discussing Kabbalah, but I note that we’ll be ‎discussing a branch of knowledge that Kabbalah is a cipher for.‎

P for a Plain (Peshat) interpretation of the Bible.‎
R (Remez) for a symbolic interpretation just under the plain sense of the text. Remez means ‘hint’.‎
D for Derash means “inquire” and refers to comparative interpretation.‎
Sod (pronounced sode) is the secret method of biblical interpretation. ‎ 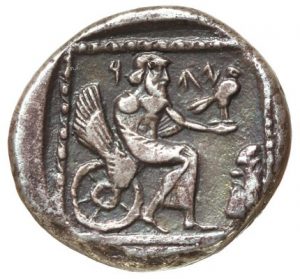 The secret method was concerned with the conformations of the Universe as the ancient semitic ‎peoples thought of them. They called this ‘the Divine Chariot’ and they imagined that it existed prior ‎to the creation of the heavens and the earth by God. They imagined that God sat upon this chariot and ‎rode around in the clouds on it causing the storms.

Ezekiel refers to this Wheel, but it’s also called ‘the ‎Seven Palaces’ in texts such as the Hekhalot. According to their ancient way of thinking, they believed ‎God used 22 letters to create the world with, and these 22 letters were each attributed to separate ‎sections of the wheel that moved the Divine Chariot. 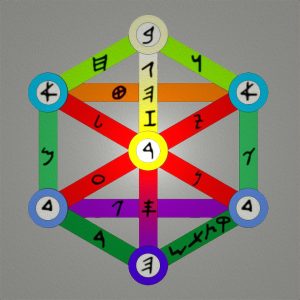 ‎
In the Genesis account of creation, the 22 letters are attributed to the first two chapters, but the order ‎of the letters in the alphabet are different from what they are today, and that’s because Genesis was ‎created in a different Hebrew writing script.‎

The Jewish King Ezra changed the official writing script of his people from Paleo-Hebrew to Ashuri in the 6th ‎Century BCE. Ashuri has 27 characters, but Paleohebrew has only 22; one for each letter. Ashuri has a ‎number set from 1-1000 but Paleohebrew has a number set from 1-200. A peculiarity about the ‎Paleohebrew script number set, is that it has two letters with the value of 3, and another two letters ‎with the value of 4. A lack of numerical linearity was justified by the final total of the order of the ‎count (217) because it was a divine number – being seven times the number of EL (God); the creator.‎

So this is the way that the paleohebrew alphabet is attributed to the verses of Genesis chapters 1 & 2 (from right to left): ‎

Studying Genesis can tell you about the qualities that each letter contributed to the creation of the ‎heavens and the earth. If you use these numbers to study the gematria of Genesis you’ll discover ‎various matters concerning astronomy (not astrology) and the calendar recorded within the text.

The ‎number set was also transposed to the Greek script so certain Christian texts (such as 1 John) carry this ‎subset of mathematical information used by the Sod to interpret the text with.

There are many great online programs that can help you learn the 22 letters of the alphabet in under ‎an hour. I’d recommend the this Hebrew Quizlet;https://quizlet.com/222209/hebrew-alphabet-flash-‎cards/‎

You could also make your own and add the letter values to them, or even make scrabble-tiles to help ‎you count Hebrew words.‎

The calculations that reveal Ezekiels “living creatures” to have the likeness of Abraham are located in Ezekiel 1:10:

Consult this diagram of the Seven Palaces for this next part, and I’ll show you why….

Eagle = ‎נֶ֖שֶׁר‎ = 253:
For this one we collect the letters from all four paths and palaces connecting to the Palace of the Aleph on the right hand side of the wheel:

It is as Rabbi Shimon ben Lakish once said: “The patriarchs they ‎themselves were the Divine Chariot!“